By Lina Benabdallah for Africa is a country 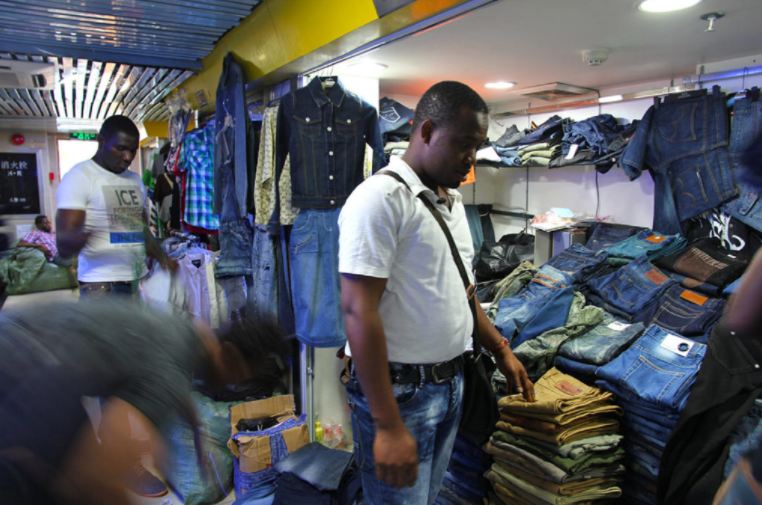 Guangzhou, in Southern China, has a long tradition as a trading port. More recently, in the wake of the Chinese state’s aggressive foreign and trade policies to Africa, the city is also home to a growing community of migrants and businesspeople from that continent. The latter buy goods in bulk in Guangzhou to sell back in Africa. Some have decided to stay.

In 2009, The New Yorker published, “The Promised Land,” by Evan Osnos “… which looks at the wave of African traders moving to China. The largest group has settled in the city of Guangzhou, where Chinese neighbors have named the community Qiao-ke-li Cheng—Chocolate City.” Though Osnos’s article wasn’t the first in-depth look at African migrants in China — Osnos’s account was predated by the work of academics like Heidi Østbø Haugen, Adams Bodomo, and Roberto Castillo — however, Osnos’s article certainly mainstreamed the broad outlines of these African migrants’ experiences in China and launched an intense focus on the community of Africans in China.

African migrants’ contemporary presence in China dates back to the late 1990s when the financial crisis in Thailand and Indonesia pushed Africans (among other migrants) to look for opportunities elsewhere. To date, it is hard to find reliable information on the numbers and nationalities of the Africans in China. Academic scholarship as well as media reports estimate the numbers to be anywhere between 20,000 and 100,000. However, during the last few years, there has been a trend of African migrants leaving China to go back to their home countries after encountering hardships and disappointments. Heidi Østbø Haugen and Manon Diederich, for example, document Gambian migrants’ stories about life in China and their decision to return home. The new film, Guangzhou Dream Factory directed by Christiane Badgley and Erica Marcus, thus adds a rich account of the complexities of living in China as an African migrant.

From the very beginning, Guangzhou Dream Factory exhibits a major strength: in a break with tradition, Africans are not just objects of the camera, but subjects who represent their own stories and experiences. Through talking to expatriates of various backgrounds (and entanglements with China, including wives and children), a complex story of aspirations, deceptions, challenges, and opportunities is woven. Some of the migrants have been very successful, others disappointed, and a few have become activists in helping other Africans who have settled in the community.

For example, Rahima is an Ugandan migrant who runs an East African food service (a sort of meals-on-wheels). She is also the president of an association to look after Ugandans in Guangzhou. Rahima shares stories of broken dreams and scammed migrants who sell all what they own back home in search of dreams made in China. Many young women, she recounts, are brought to China with promises to be employed as teachers or factory workers only to find themselves forced into a choice between prostitution jobs or unbearable debt.

Rahima is filmed carrying a baby who she found in a shop near his mom’s corpse. We don’t know who the dead mom is or what part of Africa she was from. But, we do know of Eva, a Kenyan young mother who falls victim to visa-cons, quits her job in Kenya and flies to China chasing a mirage. Upon landing in China, she immediately finds out that the employment agency that she had paid was fraudulent. The only positive part about Eva’s story is that she finally manages to get back to Kenya, “jobless and indebted, but at least she was safe.”

Yet the picture is far from being all bleakness. The filmmakers talk to young African entrepreneurs who are making strong steps towards achieving their made-in-China dreams. Both Emy, a restaurateur, who aspires to makes movies in China, and the Cameroonian self-made “King of Suits,” Kingsley Azieh Che — who claims to supply about 80% of the suit whole-sale businesses in his country — are examples of the kind of opportunities that many young Africans aspire to when they think of what China means for their futures. These success stories are, unfortunately, not possible for the average African migrant to China. In an email exchange, Christiane explains that most Africans who end up doing well in China are urban, middle class. They are “people who have enough money to pay for travel, visas, accommodation, goods, etcetera. And you know that in most African countries, that is a fairly small segment of the population.”

The documentary film also raises the very poignant and pressing questions about the future of children of mixed marriages, or of those who were born to African parents but only see China to be their home. The film shows the story of a Nigerian woman, Favor, and her daughter Cherich who was born in China and speaks fluent Chinese. We learn that a few weeks after the film was finished, the immigration police caught the mom and jailed her, and that she was sent back to Nigeria with her daughter. Christiane noted that the film has opened an opportunity to voice questions of responsibility towards this generation of African children born in China, the status of their parents, and the roles that can and must be assumed by African and Chinese authorities alike.

It is true that one could simply say that these stories are no different than any typical immigrant stories, full of hope and delusion, success and disappointment. But the overall sentiment of the documentary is that African migrants in China are skilled entrepreneurs, creative business-owners, risk-takers, and resilient strong individuals. This is a contrast to the images that the “Jungle” of Calais leaves in our minds, the capsizing boats in the Mediterranean, or the bare-life camps on the fringes of the EU.

If you want to see “Guangzou Dream Factory,” it is available for educational use only. For more information and screening events check the film’s website.

0 comments on “[Film Review] Made-in-China: The lives and times of Africans in Guangzhou”