By CHARLES CHISALA, for Zambia’s Daily Mail
CELEBRITIES are expected to be rich, drive big cars, swagger around in designer cloths and sleep between electrified bedding. They are supposed to be surrounded by swarms of adoring sycophants and shameless hangers-on.
Although I don’t enjoy any of these luxuries, in China I am a celebrity thanks to the pigmentation of my skin and texture of my hair – I am a black African.
So besides the head-numbing infrastructure development, the abundance of food and cleanliness of the cities, there is another story to tell about my recent trip to the Asian country.
The People’s Daily, China’s largest newspaper, invited me and 15 other journalists from Africa to learn – in two weeks – about that country in the context of the China-Africa co-operation.
I left Zambia on Friday, September 11, 2015 aboard an Ethiopian Airlines flight to Beijing via Addis Ababa, arriving in China’s bustling capital city the next day, September 12, 2015. 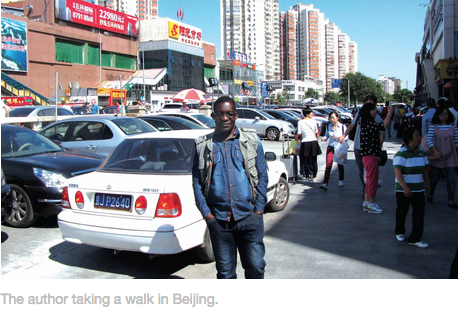 My celebrity status, as well as that of the other black African journalists, began shortly after landing at Beijing’s vast and sophisticated international airport.
As we went through exit formalities, a group of bewildered Vietnamese students were gawking at us as if we had just dropped from a different planet.
Two of them walked over and politely asked a guy from Kenya and a black female South African to pose for a photograph with them.
The two journalists consented, attracting more of the excited Vietnamese to come and take their picks among us.
One short guy and a lanky, grinning beautiful girl approached me and meekly asked me to pose for photos with them. Who was I to decline?
Then more and more of them mobbed me, taking turns in posing for photos with me while giggling like little children. Two grateful girls hugged me, and I loved it!
One smartly dressed young man was able to speak some stuttering English. “Which country are you from, sir?” he asked me. His colleagues nodded their heads in support of the question.
“I am a journalist from Zambia, in southern Africa,” I answered proudly.
“Oh, Zambia. That’s good. We are from Vietnam,” he said and shook my hand.
“Oh, from Vietnam?” I said, “I know about Vietnam; Hanoi, Ho Chi Min, Saigon, Cambodia, Kampuchea, the Khmer Rouge and Mr Pol Pot,” I said.
The guy turned to his compatriots and exchanged some gibberish with them. Their faces brightened. Half a dozen of them surged forward and respectfully shook my hand while grinning.
My new friend and voluntary interpreter explained to me that the Vietnamese were amazed that a black African knew so much about their country, its devastating war with the United States in the 1970s and the genocide in Cambodia.
After completing the clearance formalities, we boarded a fast train that took us through a tube to the exit of the airport.
The next day, our programme included a tour of the Temple of Heaven or Temple of Sun, where we joined a ‘sea’ of indigenous and foreign tourists.
Again we were a tourist attraction. Everywhere we passed, heads were turning, there were giggles and hands waving at us.
I can’t remember how many Chinese, including children, invited me to pose for photos with them. One family pleaded with me, using gestures, to pose for selfies with them.
They were bickering over me by the time Times of Zambia assistant features editor Stanslous Ngosa arrived to ‘reinforce’ me, and we shared the family between us.
In Hebei, Fujian and Guizhou provinces, it was the same.
Even our fellow journalists from Chinese media, government officials, restaurant attendants and hotel staff could not resist the ‘temptation’ to ask us to pose for photos with us.
When we ventured out to stretch our legs and visit the rest rooms during stopovers on long-distance road travels, we became objects of unusual attention. The drivers and passengers of other vehicles and fuel pump attendants gazed at us in bewilderment.
It was cool. I hadn’t basked in such adoration in quite a while.
One evening while in Guiyang, the provincial capital of Guizhou, Stanslous, Zimbabwean journalist Levy Mukarati and I took a stroll on some busy streets enveloped in flickering multi-colour neon lighting. We entered a bar or restaurant here and there for a drink and just a look-see.
Young men and women were gesturing and smiling at us. “Yea, yea man! Cool man!” a group of young revellers shouted after we waved back at them.
As we were walking back to our hotel, we met three jovial young ladies who waved at us. When we waved back, they were beside themselves with delight, giggling, pinching and nudging one another.
Back at the hotel, we asked a young male employee, whose English was quite fair, why we were attracting so much attention from the locals.
“Oh, many people here are saying you are black Americans,” he said. “Also, they are surprised and happy to see foreigners, especially black people visiting their town,” he said.
On September 22, 2015 after we had returned to Beijing, we had the privilege to enter and sit in the Great Hall of the People, the seat of the Communist Party of China Central Committee (CPC-CC).
One of our young female Chinese interpreters said she had never had such a rare privilege before.
“It is not easy to even just enter the courtyard of the Great Hall for an ordinary citizen like me. I have never been here before,” she confessed.
On the last day, we went to the famous Great Wall of China in the mountains outside Beijing.
Despite the suffocating heat, I walked on the steep steps on top of the wall, which in some places was as wide as eight metres, up to the seventh watch tower on the crest of a mountain, the highest point.
It took me one hour and 45 minutes to accomplish the feat, and I lost two kilogrammes that day. I had earlier shed three kilos.
When is my next trip to China?

1 comment on “[Media Reports] Another perspective on ‘being black in China’: “Chinese thought we were black Americans””