Over the last decade, more than a dozen #SinoAfrica documentaries have been produced. Here’s the list of the 13+ must-see films about Chinese in Africa and Africans in China. While the SinoAfrica filmic production is still in its infancy, the materials below are part of a wider assemblage of visual contents (i.e. documentaries, movies, music videos, personal recordings) that when put together give us a very interesting, somewhat comprehensive, perspective on what’s going on between Africans and Chinese in this (transnational) day and age. It is important to keep in mind, however, that the production processes of the materials below still replicate power asymmetries in terms of (global) media representation: an overwhelming majority of the available materials are done by white westerners. So, judge by yourselves, but I believe the ‘eurocentric gaze’ has a grip on the existing SinoAfrica documentary universe.

This 2010 documentary produced by British brothers Nick and Mark Francis is one of the best films on SinoAfrica relations. With a focus on Chinese in Zambia, the Francis brothers comprehensively explore the many layers of Chinese involvement in the country. This is a documentary about grassroots exchanges between Chinese and Africans that manages to represent the SinoAfrican encounter in all its complexity. Amongst the 4 or 5 documentaries that I show to my ‘Africa China Relations’ students at HKU, this is generally their favourite. Great teaching resource! Full version available for online rent here (IMBD: 6.2/10 – 77 votes) | web: http://whenchinametafrica.com/

At first, it’s difficult not to be suspicious about this documentary. Bram Van Paesschen, a Belgian national, directs a film that features the cultural encounter/clash of a Chinese and a Congolese in Congo. The risk of the typically biased eurocentric gaze runs high here. However, as you watch, the film becomes a really unique piece portraying the SinoAfrican everyday and the cultural (mis)understandings between Leo and Eddy (who’s perfectly fluent in Mandarin) – both men work for the Chinese Railway Engineering Company (CREC). Slow narrative, and at times seems as if it was acted, but it’s definitely worth watching. Not very suitable for classrooms (if you ask me). Full version below (7.3/10 – 61 votes)

This is among the first documentaries that looked into the flipside of Chinese presence in Africa: Africans in China. This is perhaps the strongest reason to watch the film. Dutch director Pieter van der Houwen makes it clear since early on, ‘The Africa China Connection’ is a ‘Western’ perspective/reflection on why are Africans going to China – and NOT to Europe. Arguably, the documentary is not so much about ‘Africans in China’, as such, but about Europe’s alleged decline. In the eyes of van der Houwen, (Fortress) Europe has managed to isolate itself to a point in which it’s not attractive to Africans anymore. A yearning for the days in which young Africans dreamed of Europe (and only Europe) underwrites the film’s narrative. Critically, van der Houwen tackles some issues surrounding African presence in China (i.e. visa problems), but he mistakenly assumes that China makes it easy for foreigners to stay in the country. Having said this, the discussion about mobility/migration comes across as interesting – mainly because philosopher and political scientist Achille Mbembe, and Ian Goldin, former Vice-President of the World Bank & advisor to Nelson Mandela, analyse the significance of changes in the destinations of the African diaspora. A fly-in/ fly-out perspective but still worth the while. Full version not available (Not rated) | web: FB page

American directors Melissa Lefkowitz and Dorian Carli-Jones explore Guangzhou’s burgeoning African entertainment industry through the lives of three African hip-hop artists who are trying to find success in the face of China’s challenging labor and immigration laws. The film follows the entertainers as they prepare for their shows, perform, and live their daily lives with their Chinese and African family members and friends. Also a fly-in/fly-out perspective, but very worth watching! Suitable for classrooms (short documentary).

A 2006 documentary film by Luke Mines and Jeremy Goldkorn about Afrika United, a team of Africans playing in a football championship league in Beijing, China. Full version (Not rated)

People and Power sent Sino-French academic Solange Chatelard and filmmaker Scott Corben to Zambia during the presidential elections in September 2011 to investigate whether Africa has entered a new era of colonialism with Chinese firms maltreating workers and devouring the continent’s natural resources. Full version (Not rated)

China’s big arrival on the continent has challenged Western powers and sparked debate about a new Battle for Africa. But the real Battle for Africa is between Africans and its leaders – a battle for better governments. Al Jazeera English’s People and Power program broadcast this two-part documentary hosted by veteran journalist Sorius Samura. Full version (Not rated)

Many African entrepreneurs today consider China as the new land of opportunities. One of them is Nathalie Fodderie from the Democratic Republic of Congo (DRC). On a reconnaissance trip to Guangzhou, in Southern China, she has three weeks to find equipment for her Kinshasa restaurant that needs complete refurbishment. Fodderie works with an established network of African and Chinese middlemen and traders and haggles with some of the toughest businessmen in the world. Aljazeera’s Witness takes us through her journey, as she grapples with geographic and cultural hurdles to make a profit. Must documentaries about Africans in Guangzhou are about Nigerians – this is a rare exception. Worth watching! Full version (not rated)

Travelling across three continents, BBC correspondent Justin Rowlatt investigates the spread of Chinese influence around the planet and asks what the world will be like if China overtakes America as the world’s economic superpower. While many in the West view Africa as a land of poverty, to the Chinese it is seen as an almost limitless business opportunity. From Angola to Tanzania, Justin meets the fearless Chinese entrepreneurs who have travelled thousands of miles to set up businesses. Worth watching and suitable for classrooms – the least popular of the documentaries that I show to my students, though. Full version (IMBD: 5.8/10 – 48 votes) In China, an unprecedented surge in African migration has led to a rise in marriages between Chinese women and African men. A GUANGZHOU LOVE STORY captures the love, heartache, and real life challenges of Afro-Chinese couples attempting to forge a meaningful future together in the face of racism and xenophobia. GUANGZHOU DREAM FACTORY is a documentary portrait of the African communities of Guangzhou, China – currently in post-production. 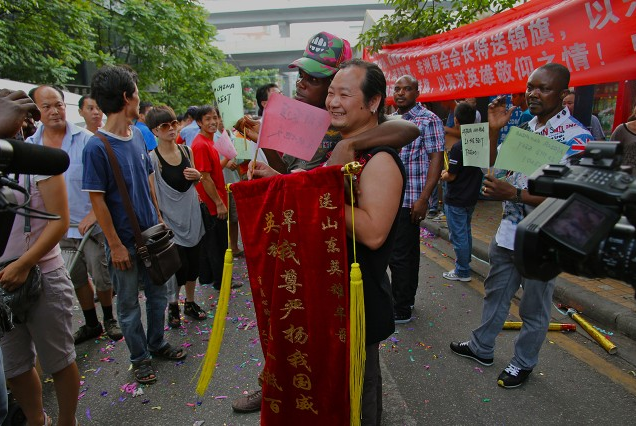 The Stream – How China is changing Africa

Inside Story – China in Africa: investment or exploitation?

Inside Story – Is China exploiting Africa?

And the more than 100 chapters of CCTV’s Talk Africa