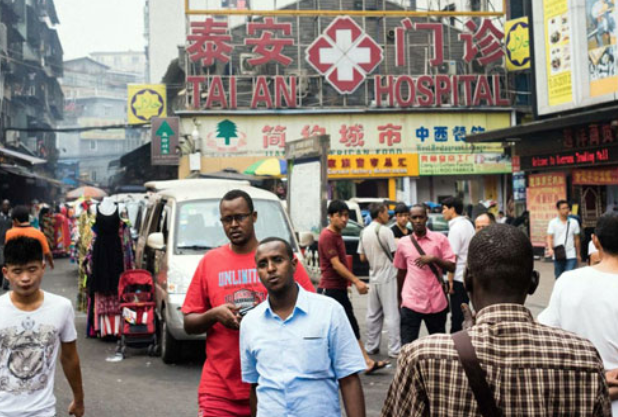 Ugandan media constructing yet another story about China cracking down on Africans. I’m not sure why but every year, around July/August, international media comes again with the cracking down story. Is the news cycle affected by the heat, or wtf?

By Stephen Kafeero for Daily Monitor

Individuals holding Ugandan, Nigerian and passports of some other countries have in recent weeks become a target of authorities in China as the Asian economic giant cracks down on crime they say is orchestrated by foreigners.
As a result, some Ugandans we talked to for this article have either been forced out of China or compelled to live on the country’s streets after they were kicked out of or blocked from staying in low-cost hotels and apartments in China.
The months of June and July have been particularly hard not only for Ugandans, but also other Africans, according to interviews with victims and witnesses. Some Ugandans have resorted to social media platforms to urge the government to intervene in the matter.
Some of the Ugandans in China this newspaper spoke to say they were not only forced to sleep on the streets, but also struggle to get what to eat, given that restaurants that prepare African food have since been closed on the orders of Chinese authorities in respective provinces and cities. Those that prepare Chinese food, we were told, are allowed to operate but don’t entertain African patrons.

Old rule
The “system” in areas with a high concentration of Africans, according to some Ugandans who have done business in China, has been on for the last at least five years but was escalated in June targeting mainly Ugandans and Nigerians.
Africans from other countries and some South Americans would later be included.
They have since been advised, we have learnt, to seek accommodation in “much more costly” four and five start hotels “if they have come to do business in China”.
The major problem is in Guangzhou, the capital city of Guangdong Province, which has the largest concentration of African immigrants and traders of any city in China and Asia, with incidents of “kicking out Africans” first reported in Guangyuan Xi Lu, Baiyun District, and Guangzhou City.
Since 2013, the Chinese government, through the local police, has been conducting immigration enforcement sweeps with the number of Africans in Guangzhou reportedly on the decline since 2014, after stricter immigration laws and policies were implemented.

New measures
One notice posted on the entrance of a hotel frequented by Ugandans, issued on July 5, reads: “Dear guests, because of the notice of receiving from higher level notice [sic], our apartment is not allowed to receive African guests since July 5. The guests from African countries will be asked to check out before July 6. Please forgive me [sic] for the inconvenience I [sic] have made to [sic] you.” The same notice was also issued in Chinese.
New arrivals are most affected, with many travelling on short business trips turned away on arrival at respective hotels and other such lodgings where they plan to stay even after being cleared by Chinese immigration authorities to legally enter the country.
“I was denied service at this particular Chinese restaurant where I had been a frequent client each time [I]am here. I had to walk around looking for some other place to have a meal. So, you find yourself in a situation where you have neither where to sleep nor where to eat. The police ask you to move some miles away from this market centre in order to book a hotel. It’s quite terrible,” Mr Christopher Ohwayo, who says he is a Ugandan businessman, posted on his Facebook wall on July 23
Mr Ohwayo confirmed to Sunday Monitor that he had indeed issued the statement and said he is a regular traveler to China.
Worse still, a lease on a hotel almost exclusively occupied by Ugandans, we have learnt, is due to expire and parts of the complex were last week declared out of bounds with those checking out not allowed to return. Also, new “African customers” are not checked in.
Hotels such as Xiaobo, Yuyanga and Tongtong, among others, frequented by Africans have been affected.
In Guangzhou’s Xiaobei District, popularly-known as “Little Africa,” where many Africans congregate, especially at the Elephant Mall, business has been unusual. The purge on Africans saw all “small” African shops closed.
Those who frequent the place to get a taste of food from home, as well as other products were left stranded.
Roadblocks were also conducted in various towns and taxis transporting black people stopped, and passports confiscated from passengers.
“They take your passport and when it is returned, the visa is cancelled,” a Ugandan, who asked not to be named, told Sunday Monitor.
“Generally, Ugandans are in good books with China and we have more privileges than most countries, except this passport issue that is on the rise,” a Ugandan student pursuing graduate studies in China, told Sunday Monitor, also on condition of anonymity.
The case for Ugandans, sources say, has been worsened by many suspects involved in crime, especially drug trafficking, being found to be holding Ugandan passports. Many of the culprits are reportedly Nigerian nationals and questions are being asked how they obtained Ugandan passports.
The drug trafficking crime attracts a death sentence on conviction in China. Several Ugandans are already on death row after being convicted of the same.
A senior government official told Sunday Monitor on condition of anonymity because they are not authorised to speak to the media that the blame for Ugandan passports being abused is squarely on the Internal Affairs Ministry.
The Directorate of Citizenship and Immigration Control, which among other things issues passports, is under the Ministry of Internal Affairs.

0 comments on “China cracks down on Ugandans, Nigerians”