Thanks to China’s confused visa system, many African traders, in particular Nigerians, are turning from successful businesspeople to illegal immigrants overnight. 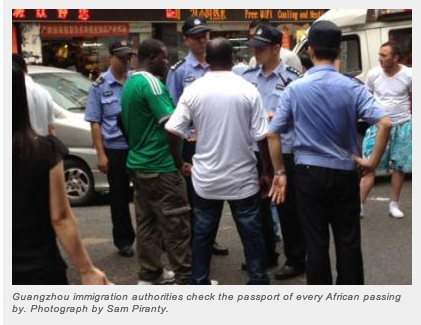 Over a cup of rather terrible coffee in a tiny McDonald’s above a marketplace in Guangzhou, George*, a young smartly dressed Nigerian with extremely shiny shoes and perfectly-shaped facial hair, explains how he went from being a successful businessman to an overstayer.

Speaking quietly to avoid drawing attention, George recalls how he arrived in Guangzhou full of hope in 2007 when the flow of trade between the city and Africa was at its peak. He came on a 6-month visa, which he extended by a further 3 months when it expired, allowing him to continue purchasing and selling all manner of goods, from bath tubs to boxing gloves.

Business was booming, but then midway through his extension, George hit hard times. Labour and living costs began to rise across China, the Chinese currency devalued, and George watched as his profit margins dwindled. To maintain the income he needed to survive, the young businessman decided to invest all his savings into purchasing more goods.

However, sourcing products from a factory near Shenzen and then transporting those goods from China to Nigeria can take months. And having already made such an outlay, George didn’t have the money needed for a flight home. He applied for another visa extension, but this time his request was denied. He gathered together the last of his savings and hired a visa agent to help him out. The agent made promises, but the day after George’s visa expired, a middleman simply handed him back his passport with a note from the agent saying he couldn’t help.

George was stuck with neither a valid visa nor money for a flight home, and his goods were still in transit. If he went to immigration, he knew the authorities would arrest him, fine him and force him to pay for his flights or stay in detention. And so, amidst pressure from his family in Nigeria to continue sending money home, George made a decision. He remained in Guangzhou, but he had now become an overstayer and the nature of his stay changed dramatically.

“Now there are so many things I cannot do,” he says. “Factories won’t let me buy their goods anymore. They always ask if they can see my visa. Yesterday I went to an internet cafe and even they asked to see my visa. An internet café! Who is this guy to ask me that? He just works in an internet café! He is an ordinary citizen. The Chinese don’t trust anyone. What does he think I am going to do without a visa? Burn down his shop? I have a university degree, I bet he doesn’t.”

As he talks, George appears almost embarrassed as he avoids eye contact, his brow creased with anger. George’s pride has been seriously dented and he repeatedly tells me about how prior to coming to China, he was a wealthy and respectable businessman. Now, he says, “It’s like I am in prison but outside. I am trapped forever here.”

“It’s not just places I cannot go to,” he continues, “there are certain times as well. I mainly go out in the evenings because the immigration police might catch me, and if they do, you have to run. Sometimes if they catch you and you take too long to find your passport, they even beat you. They do not treat you like human beings.”

Many people like George have been detained in Chinese prisons and with no help from official Nigerian state authorities, the only hope of release lies with the community organisations in the city. Most African states are represented by a community organisation, who if informed of a compatriot’s detention, will collect money from members and contact family members back home in order to pay for the return flight back to Lagos, Accra or Luanda. Most Africans who touch down in Guangzhou immediately contact these community organisations in order to open up trade networks and announce their presence in the city in case something goes wrong. They offer advice, protection and networking opportunities in a complex, competitive and often overwhelming environment.

At sunrise one late summer morning, beneath the thick smog that engulfs Guangzhou, over one thousand police dressed in light blue and grey uniforms raided the Dragon Hotel in Sanyuanli in a clear demonstration of power. For months, police had been observing the movements of many they believed to be at the centre of the drug trafficking trade. Reports emanating from the local authorities in Guangzhou suggested that the operation was highly successful, discovering significant quantities of methamphetamine, heroin, cash and weapons. Two hours after the raid began, I arrived to watch the police escort over a hundred men out of the building − they were all handcuffed, all exhausted and all African. Before I arrived, the police had arrested a number of Chinese suspects, but every arrest I witnessed was of someone from the African continent… [CONTINUE READING HERE]