On a steamy mid-August afternoon, Mariatu Kargbo, a Sierra Leonian expat residing in Beijing, stood at the front of a packed hotel ballroom. As reported by Xinhua News (新华网), Kargbo addressed the crowd, saying:

I know everyone has come because they would like to support us, but I really didn’t know that today so many people would come, thank you everyone! What we’ve done today is to say to Ebola ‘You cannot go forward, you need to stop’!

Kargbo had organized the event as a fundraiser to support ongoing efforts to stop the Ebola epidemic in Sierra Leone. To this end, a variety of donated items were auctioned off, including art pieces from Chinese artists and several embassies of African countries, flights departing from Shanghai to Africa, pottery and ceramics, and a set of gloves donated by Chinese short-track speed skater Yang Zhou. Kargbo was no stranger to fundraising: as Miss Sierra Leone 2009, she set up a foundation to donate school supplies and other things to those in need. Nor was she a stranger in China: she has appeared on Chinese variety shows, fielding questions about Africa and singing her song in Mandarin Chinese, “Marry a Chinese” (嫁给中国人).[1] 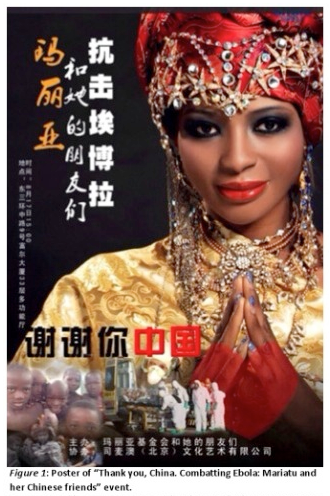 In this initial report, we provide insight into China’s response to Ebola as the epidemic unfolds. We focus on three key areas: 1) print media coverage, 2) social media commentary, and 3) brief stories of Africans living in Guangzhou. We finish with a discussion on the role of anthropology in engaging the ongoing epidemic, following Sharon Abramowitz’s recent post on Somatosphere.

Why raise the issue of China, a country that, to date, has not had any cases of Ebola?

The answer to this question is brought into view by Kargbo’s event, “Combatting Ebola: Mariatu and her Chinese friends,” exposing two overlapping trajectories that have emerged in recent years. First, the Chinese state sees itself as a global power, and as such, it should play a key role in global affairs. As China “goes global” (Shambaugh 2013), it adds a “distinctive” approach to global health (Han et al. 2008, Florini et al. 2012, Liu et al. 2014). Across the African continent, Chinese medical aid has come in the form of bilateral collaborations, financial and technical aid, and infrastructure projects. For example, the Sierra Leone-China Friendship Hospital was inaugurated by President Ernest Bai Koroma on November 13, 2012, after three years of construction, and is now being used to treat Ebola patients (photos here).

Second, Sino-African political and economic relations are substantial. In 2012, the total volume of trade between China and Africa reached US$198.4 billion, with a year-on-year growth of 19.3% (Xinhua News 2013). Over more than a decade, the direct exports from Guangzhou to African countries (mainly manufactured products) have increased more than ten times, from around US$165 million in 1996 to US$2.1 billion in 2010 (Lyons, Brown, and Li 2012). As a result, there has been a substantial increase in migration between the regions (Mathews 2011, Lyons, Brown, and Li 2012).

The Ebola outbreak adds another layer to the Sino-African relationship, whereby China is beginning to take a more active role in foreign aid to African countries and respond to emergency situations there. Therefore, China’s role in the control of the Ebola epidemic, which is reported by Chinese media outlets, will influence future relationships with African countries.’ Further, we posit social media commentary is a reflection of local anxieties about the outbreak, which largely work themselves out by framing “Africa” and “Africans,” especially in China, as a threat. [KEEP READING HERE]

0 comments on “[Report] From the dragon’s perspective: an initial report on China’s response to the unfolding Ebola epidemic”