Some thoughts on African presence in Guangzhou…*

Southern China has historically been a migrant sending region; however, over the last three decades, the region has rapidly become an important destination in transnational and translocal geographies of mobility. Every year, countless individuals from across the country and the world converge in Guangzhou, and its surrounding cities, looking for opportunities (1). Arguably, the region is a crossroads of multiple forms of mobility, crucial to the understanding of how several Chinese social, cultural and economic processes are being (re)connected to those in other parts of the world. At the level of individuals, the region is an exemplar of the contemporary intersections and interactions between people on the transnational and translocal move in China.

Recently, the salience of African presence in Guangzhou has led to the emergence of a significant body of knowledge on the topic (Castillo, 2014; Lan, 2014; Haugen, 2013, 2012; Han, 2013; Bredeloup, 2012; Bodomo, 2012, 2010; Li et al., 2012, 2009, 2008; Mathews & Yang, 2012; Bertoncello & Bredeloup, 2009, 2007; Le Bail, 2009; Rennie, 2009; and Zhang, 2008). Most of these researchers have framed African presence in the city through the binary of foreigners (migrants/immigrants) versus a fixed ‘local’ Chinese population. However, in order to better understand the dynamics and (im)mobilities behind African presence in Guangzhou, it is imperative to move beyond this distinction and problematize the notion of the ‘local’. Indeed, rather than a group of foreign migrants encountering a settled local population, Africans in the city mainly intersect and interact with ‘Chinese’ individuals on the move: ‘internal migrants’ of different ethnicities (2). 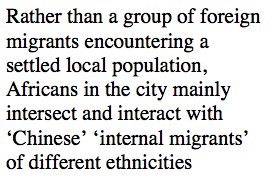 A further conceptual move is needed to clarify the nature of the spaces in which such intersections occur. This move requires thinking of ‘individuals on the move’ beyond the lens of methodological nationalism (3), and to rethink the national scale as a contingent rather than an absolute force in organizing different types of migrant experiences (Ellis, 2011). Accordingly, if the mobile subjects converging in Guangzhou (both foreign and internal) are brought onto the same plane, a different mapping of their experiences is possible. In this mapping, precarity and liminality emerge as shared conditions that characterize both foreign and internal ‘migrant’ emplacements, thus critically problematizing the distinction between ‘locals’ and ‘foreigners’. Indeed, I argue that some of the difficulties Africans face in China, such as structural and legal impediments, renewing visas, immobility from overstaying, police harassment, and the impossibility of permanent residency, bear a striking resemblance to the difficulties experienced by many internal migrants: economic vulnerability, lack of belonging, social exclusion, harassment, hampered residential rights, and impaired mobilities. Indeed, the strict visa regulations affecting Africans could be compared to the hukou system used to control internal migrants (4). While I am not suggesting that foreign and internal subjects occupy the same emplacements or have the same experiences (obviously linguistic and cultural factors need to be taken into account), this comparison is not unfounded and needs to be taken seriously by researchers trying to explain the difficulties faced by Africans in the city.

In fact, since 2008, foreigners in China have been categorized as ‘floating population’ (a common designation for internal migrants) and are supposedly subject to the rules and regulations controlling its management (Lan, 2014). It could then be said that Africans as a group (or ‘minority’ as Bodomo (2012) has called them) have been informally inserted into China’s complex systems of population control and, as a result, have been subject to the dynamics of surveillance used to police ‘Chinese’ ethnic minorities – dynamics that are best characterized by erratic but systematic control/repression. It is these dynamics that have been characterized by researchers, journalists and individuals (who are perhaps unaware of the experiences of other minorities) as racial profiling and discrimination aimed specifically at Africans (5). So, the comparison between internal migrants in Guangzhou and Africans in the city serves two interrelated purposes: first, it contextualizes African presence in the region within the complex translocal mobilities of southern China; and second, it equates the experiences of Africans with the precarity, liminality and unbelonging of internal migrants, thus challenging the common assumption that the difficulties faced by Africans in China are (or have been) unique (6). 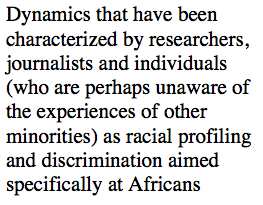 Indeed, as part of a push to control this (African) ‘floating population’, the provincial and central governments have implemented a series of measures to gradually regulate and, as Lan (2014) suggests, hamper its growth. The most relevant of these measures are: a regulation requiring Guangzhou’s residents to report any ‘malpractice’ involving foreigners, such as illegal entry, overstaying, and working/doing business without permits (Lau, 2012; Lan, 2014); housing and business registration obstacles (Zhang, 2008); and the tightening of the visa extension system at the local level (7). It is these measures, along with partial geographical entrapment (most Africans need visas to enter other countries in the region) and, in some cases, economic hardship, that are identified by many individuals as factors exacerbating their difficulties in China (8). ‘China is a difficult place,’ is a pervasive phrase used by many of the Africans that I met in Guangzhou, regardless of their status or emplacement in the city. 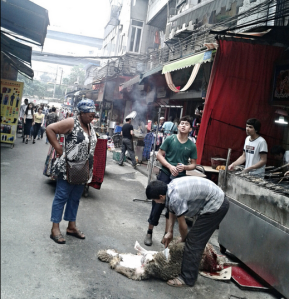