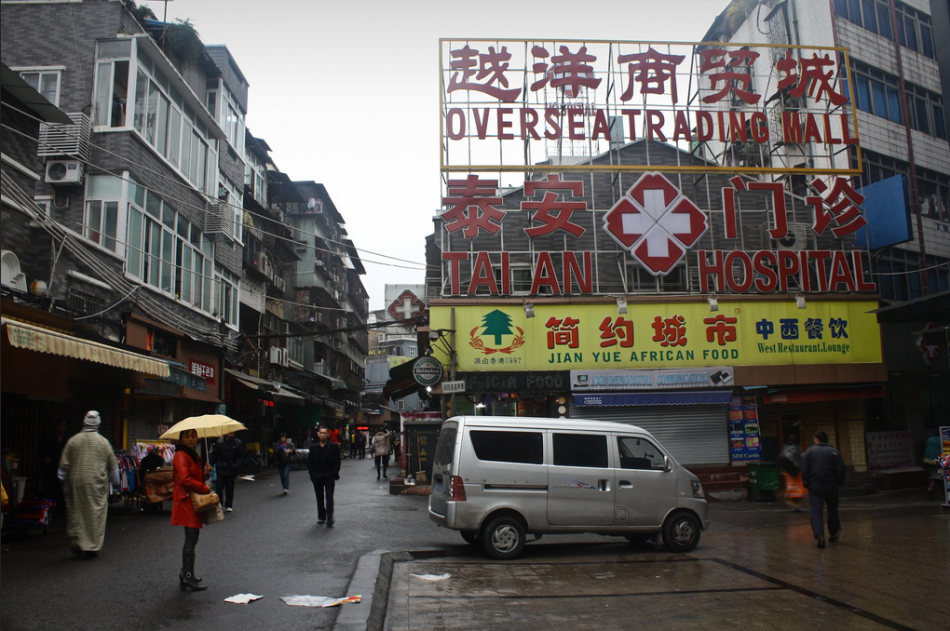 “China is the new land of opportunities,” I am told by Chuck, a 33-year-old Igbo from Imo in Nigeria. After attending a Sunday evening Christian Pentecostal congregation, Chuck picks me up to go to the restaurant he owns in the vast Guangda Clothing Wholesale Market in the north of Guangzhou. Lost inside this massive compound of warehouses and stores is the newly opened Guangda African Market—a commercial space allocated by the city’s authorities to leaders and representatives of the various African communities.

Chuck first came to China, without any contacts, in 2006; then, after moving back and forth for two years, made Guangzhou his operating base in 2008. He recalls that, in the beginning, it was not easy. “The thing is that there is no real employment in China, here you have to employ yourself, be creative.” After almost five years in the country, Chuck has managed to become a restaurant owner (Guangda African Restaurant), a trade representative (mediating business deals between Chinese and Africans), and a fashion designer (designing and manufacturing clothes that he sells in his shops in China and Nigeria), along with actively participating in the Nigerian community office’s activities.

Whilst drinking a beer in his restaurant—a richly decorated space that juxtaposes modern design with two gargantuan posters of fauna from the African savannah—I muse that Chuck and I may belong to the same generation of young people from “developing” countries that grew up in a world where the possibilities for migration were relatively rigid. If you needed (or wanted) to go abroad, the “North” was, almost inevitably, your only choice. As a middle-class Mexican, I could have journeyed north to seek employment in the United States or Canada, or perhaps, with the luck I have had in Asia, been “educated” in a university somewhere on the American East Coast. Chuck, on the other hand, could have gone to Europe, South Africa or, perhaps, the Middle East. Times have changed, however. Both of us arrived to China in 2006 (without previous knowledge of or connections to the region) and began juggling a plethora of different visas to manage the then highly erratic Chinese visa system, whilst trying to generate a measure of stability along with work/business opportunities. From all appearances, Chuck’s entrepreneurial prowess (with his restaurant, representation office, fashion shop, and import-export business), clearly exceeds mine—at 33, I am wading through a PhD and living on a scholarship. China, or more specifically what we both knew from international media about China’s growth/rise, represented a refreshing (albeit challenging, risky and unstable) opportunity to build our lives in less established/traditional, yet more transnational, ways. Over the last 15 years, the relative relaxation of foreign entry and settlement in China and the increased accessibility and affordability of international air travel, have led to waves of foreigners (like Chuck and I) arriving in search of material and immaterial wellbeing.

Located within the context of the impact of diasporic cultural globalisation in twenty-first century Asia, this article is an exploration of certain elements that structure the contemporary presence of Africans in China. Drawing on preliminary findings in my fieldwork, I place particular emphasis on three issues crucial to sense-making in the city: place-making processes (some of the ways in which Africans intersect with Chinese on a spatial level); structures of belonging (built through organisations and communities); and strategies for settlement and mobility (developed to counteract what is perceived as institutional barriers to their presence in China). In the following pages, I argue that the continued and recurrent presence of Africans in Guangzhou, and their connections with other Africans and Chinese of diverse ethnicities, have resulted in the unintended emergence of multiethnic “catering networks” that generate the necessary spaces for African communities and organisations (“networks of support”) to materialise. These networks of support, in turn, facilitate place-making processes and enhance the development of structures of belonging, which are central to the production of identities and the articulation of (sometimes transient) feelings of “at-homeness,” amongst Africans in the city. I contend that this dialectical process is central to the reproducibility of the Sino-African ensemble in Guangzhou. Moreover, I claim that a better understanding of the complex transnational and translocal dynamics enmeshed in this case study is crucial to make sense of the implications that the “rise of Asia” has had, and will have, in Asia, Africa and the world.

The article is structured as follows: in the next section, I locate this case study within the macro-narrative of the contemporary rapprochement between Africa and China, before tracing the histories and types of journeys that have brought individuals from all over Sub-Saharan Africa to Guangzhou. In the second section, I discuss issues related to the labelling of Africans in Guangzhou as migrants/immigrants, and then outline some of the patterns and behaviours displayed by Africans in transnational settings. Finally, I examine how place-making processes are undertaken at the individual and spatial levels and how this place-making structures senses of belonging. Throughout all these sections, I illustrate how the aforementioned networks are crucial devices in the reproduction of the African presence in Guangzhou.

A cautionary note on terminology is in order here. While I have elsewhere criticised the use of categories such as “African” and “Chinese,” as they tend to flatten out diversity and complexity, I still use these categories in some situations, as they are efficient discursive tools for explaining things. When needed, however, I unpack both categories and refer specifically to the various ethnicities and nationalities subsumed into them.

Before proceeding, I must state that while I have started by comparing Chuck’s journey to China with mine, this article will not be a comparison of our experiences in this country.

I. Africa(ns) in the context of the “rise of Asia”

The transformations brought about by the “rise of Asia” have had profound implications in a myriad of places, practices, and imaginations. These implications have been particularly felt on the African continent (Alden 2007; Brautigam 2011; Michel and Beuret 2009). Over the last decade, direct exchanges between Asian and African countries have translated into a huge array of opportunities at all levels—from foreign direct investment to individual trade and “migration.”

Chuck—along with most Africans I have spoken to during my fieldwork—locates his presence in China within the context of the rise of Asia. He claims that he came to the region, not only because it has become a global economic centre but because it is a place that offers a range of opportunities for “exploring your own potentials.” Many Africans in Guangzhou (from places as diverse as Congo, Zambia, Angola, Uganda, and Ghana) have told me that they see their individual transnational trading activities as central to the economic and political rapprochement between China and Africa. In their imaginations, China represents not only a personal opportunity, but also “an opportunity for Africa.”

It is not news that Chinese investments and commercial migration to Africa have had a profound impact on the continent’s economies and on the livelihoods of its people (see Alden 2007; Brautigam 2011). Take for instance commercial exchanges. China–Africa trade volume has had more than a twentyfold increase over the last decade—reaching US$200 billion in 2012 from US$10 billion in 2002 (Africa.news.cn 2013). Over a slightly longer period, direct exports from Guangzhou to African countries (mainly manufactured products)1 have increased more than tenfold—up from around US$165 million in 1996 to US$2.1 billion in 2010 (Li, Lyons, and Brown 2012, 57). As a consequence of these structural macroeconomic pushes, and of individual microeconomic efforts, only a decade after the intensification of Africa–China economic relations, China is now Africa’s largest trading partner, having surpassed the United States in 2011 (Wonacott 2011). Over this period, Chinese migration to several African destinations has had an unparalleled increase—there are now an estimated one million Chinese on the continent, up from less than 40,000 in the early 2000s (Brautigam 2011; Michel and Beuret 2009). Commercial activities related to this massive flow of people into Africa have resulted in what has been described as a “tsunami” of Chinese goods—“made in China” products are now ubiquitous in the markets of almost every big African city (Zhang 2008, 388). This “tsunami” has spurred scores of traders to develop their own transnational trading strategies in an attempt to outdo their Chinese competitors, and a first step in these strategies is often journeying to Guangzhou (Bertoncelo and Bredeloup 2007)… [KEEP READING HERE] 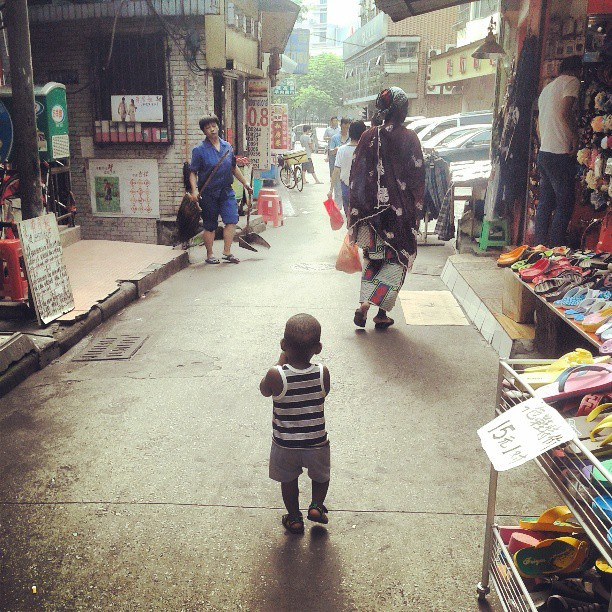 To cite this article: Castillo, Roberto (2014). Feeling at home in the “Chocolate City”: an exploration of placemaking practices and structures of belonging amongst Africans in Guangzhou, Inter-Asia Cultural Studies, 15:2, 235-257.

0 comments on “[Open Research] Feeling at home in the “Chocolate City”: an exploration of place-making practices and structures of belonging amongst Africans in Guangzhou”