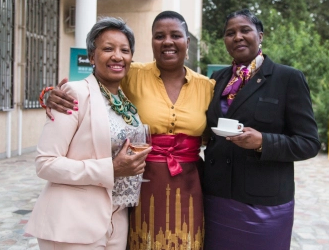 Once everyone was seated, Ms Tebogo Lefifi took to the podium. “Until the lion tells his own story, the history of the hunt will always glorify the hunter,” she began. The invocation of this well-known African proverb was incredibly fitting. It reflected the importance of honest and balanced reporting by journalists who cover South Africa-China relations, as well as the need for South Africans and Africans to be at the forefront of reporting on how South Africa interacts with China. The guests in attendance spanned a wide range of different publications, most of them from China. The Beijing Review and China Business News were among the many media publications that had reporters and staff at the Media Appreciation that afternoon.

In her address, Her Excellency Ambassador Dolana Msimang began by emphasising how the relationship between South Africa and the Chinese media is a “two-way street”. She was specifically referring to the mutual reliance between the two parties, with the South African Embassy and Brand South Africa providing access to content for the purpose of balanced and accurate reporting, and media practitioners  using this content to write stories and disseminate information. HE Ambassador Msimang made it clear that the South African Embassy in Beijing remained open to cultivating a strong relationship with the media and that its doors were “always open”.

In order to bolster the ability of the reporters in attendance to write thoroughly on the event, HE Ambassador Msimang provided a concise overview of both the state of affairs in South Africa and the state of South Africa’s relations with China. She also made sure to mention why, for many reasons, 2016 is an auspicious year for South Africa. For example, this year marks the 20th anniversary of the signing into law of the South African constitution. It is also the 20th anniversary of the Truth and Reconciliation Commission (TRC) and the 40th anniversary of the June 16 Soweto Youth Uprising in 1976. 2016 also marks the 60-year commemoration of the 1956 Women’s March to the Union Buildings in Pretoria during Apartheid. The Ambassador’s highlighting of these historical landmarks for South Africa underpinned the spirit in which South Africa week was launched that afternoon. [KEEP READING HERE]